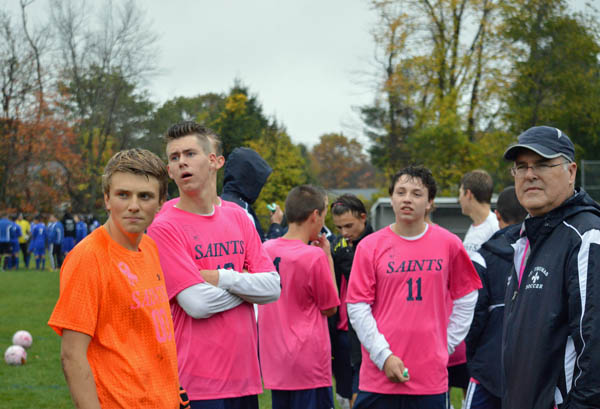 Coach Suleski has been the varsity coach at St. Thomas since 2006. His St. Thomas teams have a combined record of 131-118-18.
(High School Career record 196-149-25) His STA teams have been in the play-offs 14 of his 16 years.They have advanced to the semi-finals three times and the state finals once.

Coaching honors his teams have earned him:

from 2000-2002 Coach Suleski was the JV coach at Amesbury High School in Amesbury, MA.     In one season his team set a record for only allowing 4 goals in 16 games.

from 1997 to 2001 Coach Suleski coached Amesbury Travel Soccer teams in U-10 and U-12 divisions. Winning the Haverhill PAL Columbus Tournament twice. Having two teams win the Sportsmanship award at the Danvers Invitational Memorial Day Tournament.

Coach Suleski held the Positions of Director of Fields, Director of Summer Referee and Director of Travel for the Amesbury Soccer Association from 1997-2002

Coach Suleski is a self employed third generation sign designer and installer. You can check out his company at Sign Design & Sales.

Coach Suleski is also a Level 1 presenter for Operation Lifesaver.

Coach Dave Salvacion is back as Assistant coach.

Coach Salvacion has participated in a very special event called the Breast Cancer 3-Day. He walks over 60 miles over the course of three days with thousands of other women and men. The net proceeds support breast cancer research, education, screening and treatment through the Susan G. Komen Breast Cancer Foundation and the National Philanthropic Trust Breast Cancer Fund.  Coach Salvacion and Coach Suleski were the first coaches at St. Thomas to organize "Pink" Games for cancer awarness.

Ross joined the staff in 2015 as an assistant varsity coach.  Ross is an STA alumni from the Class of 2010.

Ross is a Certified Personal Trainer and a Fitness Nutrition Specialist.
Ross played 3 years of Varsity soccer for the Saints.
During his tenure the team went 46-7-4.  Ross was selected as a team captain for his senior year.  Ross received numerous awards during his junior and senior seasons and still holds a number of scoring records that can be seen on the Records Page.

2019 Coach Ross was recognized for 5 years of service as a boys soccer Assistant Coach.

Coach Riker joined the staff in 2016 as the JV Coach and Assistant Varsity Coach.

After his high school career, Coach Riker went on to the University of New Hampshire where he studies Kinesiology: Sport Studies and Journalism.

Coach Puertas is from Peru and has extensive experience as a translator and college teaching assistant. He earned his BA from Utah State University and his MA from the University of New Hampshire. He is the new Spanish Teacher at St. Thomas.

Coach Umland was a 3 year varsity player at Hanover (NH) High School, playing in NH division 1, graduating in 2012. In the fall of 2012, he was a starter for the Emmanuel College (MA) Saints as a full back. After his freshman year, Umland transferred to the University of New Hampshire, where he studies Sport Studies. Umland was a coach for Touchline Soccer Club, during the 2014 summer he helped lead them to the finals of the New Hampshire Soccer Conference League.

Charlie Griffiths was the assistant coach for the Boys Varsity Soccer team for 2012 - 2013.

Charlie played division III soccer for Connecticut College (center and outside back) and was named team captain and MVP during his senior year.

He is the owner of Vigilant Woodworks in Dover.

Jason joined the staff in 2012 as an assistant varsity coach.  Jason is an STA Alumni from the Class of 2007.
Jason played 3 years of Varsity Soccer for the Saints, 2 under coach Ed Deveroux and one season under coach Scott Suleski.
During his tenure on the St. Thomas Varsity Jason earned a starting position as a defender during his sophomore year.  The team went 32-19-1 over those 3 years.  Jason was selected as a team captain for his senior year.  He earned second team All State Defender by the NHSCA and received High Honorable Mention for the Foster's Dream team.  He was the Silver Boot winner for the '06 season.  He was also a member of the first NSCAA Academic Team.

Jason brings not only a knowledge of the game, but also a part of the history that is St. Thomas Soccer to the team.

Coach Matthew Guarente was the assistant varsity coach and head JV Coach for 2013.

Coach Wyand is a teacher at the Epping Middle School.

has been the Assistant coach and Reserve team coach at St. Thomas since 2006.

In 2009 Coach Morin will take on the role of assistant coach to help all three teams.

Coach Morin was one of five  USSF referees from Massachusetts that attended the first ever National Special Olympics game in Ames Iowa the first week in July 2006.

The referees traveled, at their own expense, to Ames arriving on July 1st and checked into the officials housing area on the University of Iowa campus.  The following day they joined referees from 5 other states in providing 4 man crews for all of the Special Olympic games, 27 teams from 21 states attended the games.

The referees also attended the opening and closing ceremonies for the games as well as the 4th of July celebration put on for the athletes.

Coach Morin is on the far right

Coach Miliner is a self-employed boat builder and lives and works in Eliot.
He has three grown children, a son and 2 daughters, who all played varsity soccer at Marshwood HS.